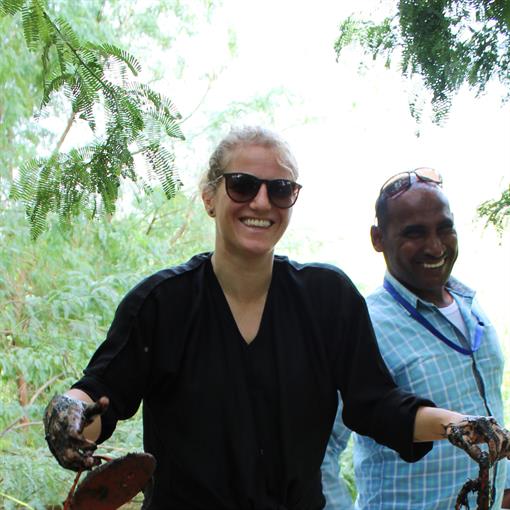 “My fascination with the sea has driven my scientific career—and a lot of my moves!”

Originally from a landlocked area of Germany, marine biologist Dr. Celia Schunter has traveled across the world to study coastal waters: she completed her undergraduate degree at James Cook University, Australia, and her master’s and Ph.D. degrees at the University of Barcelona, Spain. Just after turning in her Ph.D. thesis in 2013, she visited KAUST for the first time on a three-week field trip to collect DNA samples from domino damselfish (Dascyllus trimaculatus) in the Red Sea. As Schunter explained, access to the Red Sea at KAUST is spectacular—researchers can jump in a boat and go out on a cruise for seven days, collecting samples in the wild. Many people fly thousands of kilometers to reach what KAUSTians have in their backyard.

“Genetics is a powerful tool for asking ecological questions of the marine world.”

As a postdoc in the KAUST Environmental Epigenetics Program (KEEP), Schunter encountered the classic question of nature versus nurture in the context of ocean acidification, a significant consequence of climate change.

In her current appointment as an assistant professor at the University of Hong Kong, Schunter is studying what she calls “future waters.” When large coastal cities like Hong Kong run out of room, they often begin “reclaiming” land from the sea by extending their borders with sand or dirt imported from another location. In terms of land reclamation, pollution and dredging, the waters around Hong Kong present a picture of the future for other coastal communities as they grow.

Dr. Celia Schunter was a postdoc at KAUST from 2014 to 2018 in the Division of Biological and Environmental Sciences & Engineering (BESE). She is now an assistant professor at the Swire Institute of Marine Science, School of Biological Sciences, University of Hong Kong. She is interested in ecological genomics, the transcriptomics and epigenomics of adaptation, response to environmental change, transgenerational inheritance, and environmental effects on the behavior and brain of marine organisms.