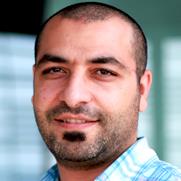 Plasma is everywhere – all the stars in the universe and even lightning here on Earth are made of plasma. Researchers used to believe that plasma could be produced only from ionized gas. Due to advances in electrical technologies, now plasma is also artificially generated in liquid media. Although plasmas in liquids are even smaller than a poppy seed and exist for less than one microsecond, they have many potential applications as a clean technology. For example, generating plasmas in water with air effectively removes toxic organic compounds from the water without the need for additional chemicals.

Dr. Ahmad Hamdan studies the potential of plasmas in liquid media as sustainable technologies for both water treatment and nanomaterial synthesis. Few research groups in the world focus on this very specific field of physics. Dr. Hamdan already had KAUST in mind as a future destination before he began his first postdoctoral fellowship at the University of Montreal (2013-2015). When he realized that KAUST Associate Professor Min Suk Cha’s research group at KAUST’s Clean Combustion Research Center (CCRC) was studying plasmas in liquid media, he decided to apply. He was impressed and encouraged by the quality of work published by KAUST researchers, in terms of both the results achieved and the supporting infrastructure.

“I am living my dream, which is fantastic.”

Dr. Hamdan does not believe in luck. An academic career has always been his dream, and his success in achieving that dream has been the result of hard work every step of the way. Every postdoc is unique in their knowledge and achievements; they should use this time of transition to hone their “professional personality” in preparation for their next step. Prof. Cha encouraged Dr. Hamdan to become an independent leader capable of steering a project from the birth of an idea, through implementation, to the final publication and even patent application. Every action performed along this path has helped him reach his dream. When Dr. Hamdan left KAUST in 2017, he returned to the University of Montreal as an assistant professor.

Today, employers are looking for multiple skills and interdisciplinary knowledge. At KAUST, Dr. Hamdan gained broad-ranging experience through his everyday interactions with students, technicians and researchers from various countries and fields of study. Across the diverse KAUST community, Dr. Hamdan witnessed mutual respect being practiced: a concept “intensively studied but rarely experienced.”

“The peak of my happiness is when, at the end of a lecture, I hear ‘wow’ from the students.”

As a professor, Dr. Hamdan loves interacting with students. He knows that his message has been received when he hears the “wow” of understanding as his students grasp the beauty of science and nature. Through his participation in training and developing the next generation of scientists, he feels that he is not only at the forefront of scientific discovery, but beyond it.

Dr. Ahmad Hamdan is an Assistant Professor of Physics at the University of Montreal, Canada. He was a postdoctoral fellow in Assistant Professor Min Suk Cha’s Plasma Assisted Combustion Lab (PACL) at KAUST’s Clean Combustion Research Center (CCRC) from 2015 to 2017. He notes that his “super gain” from his KAUST postdoc experience was his wife, Mariam, who was also a KAUST postdoc when they met.